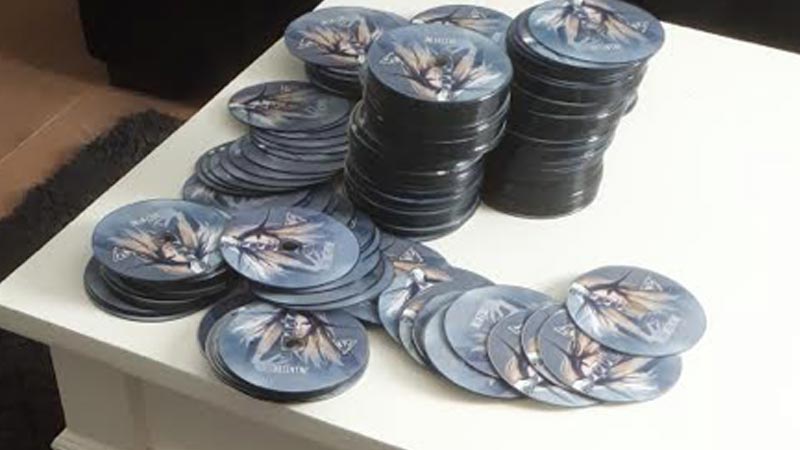 At the beginning of this year Robby wanted to use Michael Buffer's famous sentence LET'S GET READY TO RUMBLE as an intro for the album on the song Judgement Day.

We heard nothing from them and assumed they didn't care that some Dutch artist wanted to use the sample and didn't even want to take the effort to reply.

We couldn't have been more wrong. Because as it turned out the email slipped their attention and just last weekend they emailed us that they demanded to take the phrase off the album and gave no permission whatsoever to use the phrase.

Only the cd's were already pressed and arrived Monday.

Of course fixing this didn't only mean re-mixing the second song of the album. It meant re-mastering our own release and the Japanese version. It meant altering the intro tape of the show. It means paying double STEMRA costs, it means paying for all discs to be officially certified destroyed to avoid future lawsuits. It also means re-pressing all discs. And of course the enormous amount of work of carefully removing the 'illegal' discs from the jewel cases and later putting all 'legal' discs back into them which we are doing right now.

You can obviously understand this setback costs loads of money. Our previous crowdfunding campaign was really successful, which is why we decided t produce a super-deluxe version of THE ALLIANCE, and thus broke even.

To finance this enormous setback we decided to release JUDGEMENT DAY as a single through another crowdfunding campaign a.s.a.p. Digitally we'll just release the single just like it is on the album. Or slightly different. But on the actual CD single disc we will also put a rare version which Robby recorded this weekend (no, it doesn't have the 'Ready to Rumble' into on it in case you wondered)

This version won't be released anywhere else. You can purchase it for a minimum of 10,- ex shipment (or pick it up at the release party) and sponsor extra for as much as you want to/can miss along with your order. We hope this will help us cover the costs for this huge mistake.

If you want to pre-order JUDGEMENT DAY and/or sponsor extra you can email us at valentinemerch@gmail.com.

Also you can still buy one of the other sponsorship perks or just the album for only EUR 20,- at: http://www.robbyvalentine.nl/crowdsourcing/. You can also sponsor anonymously by donating on Robby's paypal account: valentinerobby@gmail.com Please write SPONSORSHIP in the description